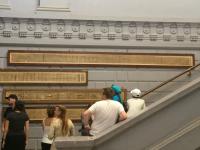 As we mentioned in our post on the British Museum, Egyptian artifacts are tricky. On the one hand, it’s a shame that important pieces of history and Egypt’s cultural heritage have been stolen away and distributed globally for the benefit of other countries. On the other hand: there’s the condition of the Egypt Museum circa 2016.

Many artifacts were uncurated, unlabeled, and stored outside. One of the best preserved copies of the book of the dead, a religious text on papyrus that is thousands of years old, hung in an open airway stairwell, too high to enjoy, unlabeled and uncurated and, worst of all, exposed to sunlight and uncontrolled humidity.

A new Egypt Museum has been opened since we visited Cairo and I sincerely hope that it does a better job of caring for and educating visitors on its priceless contents. Until then, was putting all of that stolen Egyption stuff in the perfectly climate-controlled and dimly lit British Museum so bad? We’ll leave it up to you to decide.

The most dangerous thing we’ve ever done, or, why you should always check travel.state.gov