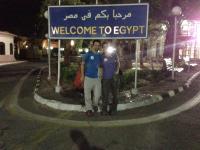 It was 11pm in Eilat, Isreal, and we were waiting on a dark street corner. We had impulsively purchased a tour to see Cairo just 24 hours earlier and were instructed by the company to wait here for a man with a white van. When he pulled up and waved us in, we found that we would be traveling in a party of 6: 3 Americans, 2 Colombians, and 1 guide. We climbed in and chitchatted with our fellow travelers, trying to keep our excitement in check. (Pyramids! King Tut! The Sphinx!) Before long, the van stopped at the Taba Border crossing, the driver pointed across and said “What are you waiting for? Go.” This was nowhere in the tour description.

We took our money, and our passports, and walked across the dark border on foot in the wee hours of the morning. It turns out that the Israelis couldn’t cross into Egypt and vice versa, but the guide promised that someone would meet us on the other side. We hoped he was telling the truth.

In the no man’s land between Israel and Egypt, our belongings were searched, money was exchanged, and an unfamiliar man who we hoped was legitimate took our passports, making for a nerve-racking 30 minutes. In the end, we breathed a sigh of relief as we received the most beautiful visas we’ve ever seen and were cleared to enter the country. 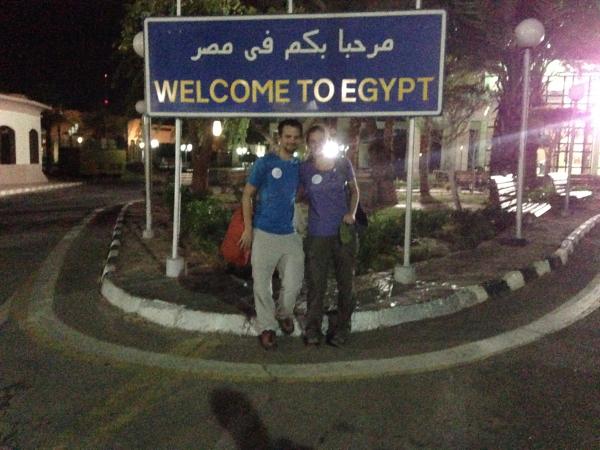 The man in no-man’s land ushered us out the door to meet another unmarked van. An Egyptian guide and 1 heavily armed guard joined us, sporting a pistol on his hip and a big black gun with a large magazine under his suit coat. He told us the military was almost ready for us.

Context that you should know, (and which we did not know at the time we booked this tour), was that ISIS was active in large swaths of the Sinai Peninsula in 2016. In order for tourists to cross at that time, a military escort was legally required. Our trip was no exception. We were joined by one armored truck in front, one armored truck in back, 4 men with rifles in each vehicle, and 2 drivers, in addition to our aforementioned guide and armed guard. In that situation, we weren’t sure how safe we were supposed to feel.

The escort required that we take the southern (longer) driving route because there had been terrorist activity on the northern (more direct) highway. Parts of the road were blocked with alternating concrete barriers and barrels, forcing our van to drive slowly and weave back and forth between the obstacles. Sandbag outposts were dotted along the side of the highway and armed guards poked their guns out of every available high point, including the minarets of mosques. Adolescent males stopped us to check our passports every 30 minutes or so and walked around waving large guns about in an imposing manner that was not confidence-inspiring. It was a stark contrast to the professional-seeming military men we had seen throughout Israel. Lights from Syria played on the Bay of Aqaba and were difficult to photograph in the bumpy back of the van. It was becoming clear that we were not going to get any sleep tonight.

As dawn broke, we were crossing the Suez Canal through the Ahmed Hamdi tunnel. Our guide instructed us not to take any photos because this is a highly restricted military zone due to the financial and political importance of the canal. We started to understand why this region was high value, for Egypt, the international community, and terrorists alike. 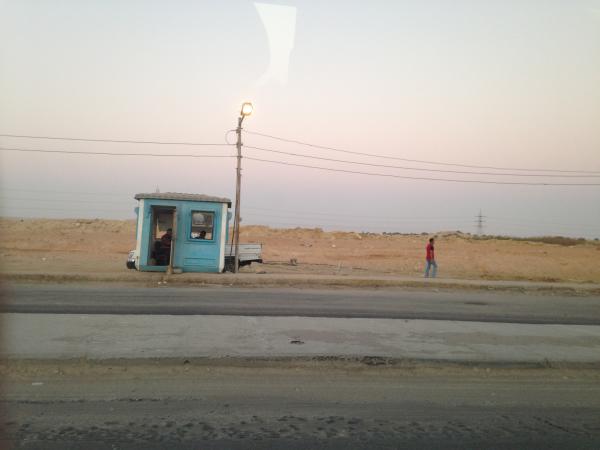 By the time we got to Cairo, we were regretting that we would have to repeat this whole trip in reverse the following evening. We didn’t anticipate that coming back would be even worse.

Several hours into our return trip, we were stopped. We received no explanation and our guide refused to translate for us the conversations that were happening between the military escort, outpost guards with walkie-talkies, and the Egyptian men in our van. Everyone who could speak Arabic looked uneasy. Everyone who couldn’t looked scared. We were held there, unable to leave the van, unable to get any explanation, for hours.

Eventually, again without any communication, the caravan started up their engines again and we slowly made our way back to Israel. We weaved between the barriers, walked across no man’s land, presented our passports, and passed through security. We found our rental car in Israel and immediately crawled in, locked the door, and collapsed from exhaustion and relief, sleeping in the parking lot for several hours. It wasn’t until we woke up and checked the news that we realized that there was an IED explosion that night on the parallel road to the one we traveled on. People had died.

This experience brought us closer to conflict than we had ever intended to come. No sphinx selfie is worth the amount of risk we unintentionally took that day. A quick search of travel.state.gov would have revealed warnings such as “do not travel to the Sinai Peninsula due to terrorism” and “The Sinai Peninsula remains a particularly dangerous area, with frequent attacks on security forces and civilians.”

From this trip on, travel.state.gov has been our guiding resource, and we recommend that anyone planning a trip review it carefully.

The Problem with the Egypt Museum in 2016