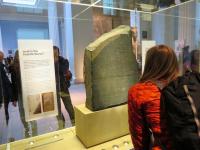 Our Airbnb host Errol, on the British Museum:

“They’ll ask for a donation but I don’t give them a thing. It’s just a bunch of stuff that’s been nicked from other countries.”

It’s true. British archaeologists have scoured the globe and brought back roughly 8 million beautiful and important artifacts from civilizations worldwide. Is it ethical? We think it depends. On one hand, it seems a shame to rob countries of their history. On the other hand, we’ve seen museums in developing or unstable countries (e.g. Egypt and Cuba) store uncurated collections of important artifacts in non-climate-controlled rooms, direct sunlight, or even outdoors. In that case, the British Museum’s impeccable preservation and curation doesn’t sound so bad.

We were unable to see all of the museum in an afternoon, as you can imagine, but we did make a point to hit the museum Director’s top highlights, including the Rosetta Stone.