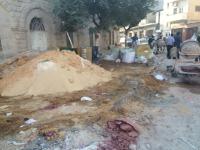 We stuck out like a sore thumb. I, for one, was nervous. Our comfortable rental car was parked in a gas station parking lot many miles away and we had negotiated our way into the heart of Palestine by taxi using sign language, nods, smiles, cash, and the help of an occasional translator. We were aware we were getting ripped off and understood that this was the price of visiting a place without knowing any of the language or much of the culture, on our own. We hadn’t seen anyone who looked like us since we left westernized Israel.

Our first stop was the Mount of Temptation, where a very well-dressed man followed us around the site, lurking nearby. We debated: was he there to give us a hard time, or to make sure we were okay? Either way, we tried to stick ourselves in packs of middle eastern and Indian tourists, preferably near mothers and grandmothers. The site itself is interesting and said to be the location that the devil tempted Jesus in the desert. Given that it was 9am and already 100 degrees, I could imagine that spending any amount of time here was a bit of a trial. We snapped some photos and snuck away from the well-dressed man, unsure if we should be mentally thanking him or relieved to get away.

Back at the base of the mountain, we approached the ancient Tell es-Sultan. Tells are fascinating. They’re hills that are literally made out of the rubble of thousands of years of cities, built and collapsed and re-built over time. They are an archaeological goldmine and this particular one is one of the oldest known settlements in the world. It dates back to 10,000 BCE. Remember those Canaanites, Phoenicians, and Philistines from the bible? They lived here. Remember that story about Joshua fighting the battle of Jericho, marching in circles and playing trumpets and the walls came a-tumbling down? Whether or not the story happened exactly like that, these are those walls. It. is. magnificent.

It was also scorching hot. By this time, the thermometer was nearing 120 degrees Fahrenheit. I was a bit dizzy and very dehydrated; we had to keep moving. We panted our way to a roadside juice stand with fresh squeezed juice that we really hoped was sufficiently safely prepared and stored for our weak American stomachs. Happily, we met a Palestinian boy there who spoke decent English and scooped us out some. It was sweet, and fresh, and refreshing. We didn’t talk about anything particularly important but this chance meeting would have a lasting impact on us: anytime Josh or I hear about a Palestinian young man who was killed in the news, this boy flashes in our mind, and we hope it wasn’t him. I know this is morbid but this is one of the hazards of traveling, right? It puts a face on the conflict in far flung lands and makes every sad NPR article a bit more painfully real.

This boy was just one of the kind-hearted people we met while wandering around the city of Jericho. The atmosphere in the town of 18,000 was a mix of hope and desperation. Tourists haven’t been coming here much in recent times because they are afraid of unrest and conflict, cutting off the economic inflow. Possibly because of this, the Palestinians were extremely happy to see us and every person who we passed took time to say “Welcome to Jericho!”. The vast majority didn’t appear to speak a single other word in English, but they had all memorized that phrase and we heard it over and over throughout the day with smiles, waves, and gifts of crunchy dates pressed into our hands. Sometimes the desperation peeked through, like a man who started haggling a simple salad at 15 US dollars when we could get large sandwiches for a dollar or less 5 feet away. The poverty in many places was apparent. Still, there was an undercurrent of hope. There were election posters hung about, including the faces of some female candidates, and piles of construction materials on the street corners. Men placed bricks and stones happily, seemingly optimistic about the future of their town.

Eventually, it started to get late, and we were hot and dusty and parched. We needed to arrange to meet our taxi driver and make our way back to Jerusalem. As we drove west, it was a bit like driving forward through time. From stone ruins and dirt roads, past whitewashed mosques, simple dwellings, a gas station and small settlements, right up to the modern skyscraper construction of Tel Aviv. I would go back in time to Palestine in a heartbeat.

Do the Touristy Thing

Yes, as in the one from the Bible

Floating in the Dead Sea