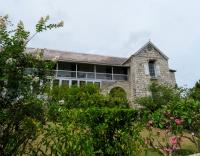 On Christmas of 1831, a man named Sam Sharpe lead a slave rebellion that spread throughout Jamaica. Plantation owners fled and most of the great plantation houses were looted and burned to the ground. Only a very few great houses were not destroyed, and Greenwood was one of them.

Why were some plantations spared? It is said that if a house survived the rebellion, it is because the owners were kind to their slaves. Greenwood Great House was the estate of Hersey Barrett, who was one of the only plantation owners in Jamaica known to educate his slaves. He reportedly gave them rest, good healthcare, and treated them kindly. The fact that his house remains to this day with the original furniture, books, maps, and treasures in tact may be proof of that.

Many of the Great House’s musical instruments still played, like this Polyphone. You can enjoy a bit of the music below.

Observations on Schools in Jamaica

It glows! Swimming in a Bioluminescent Bay in Jamaica