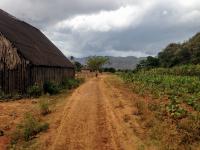 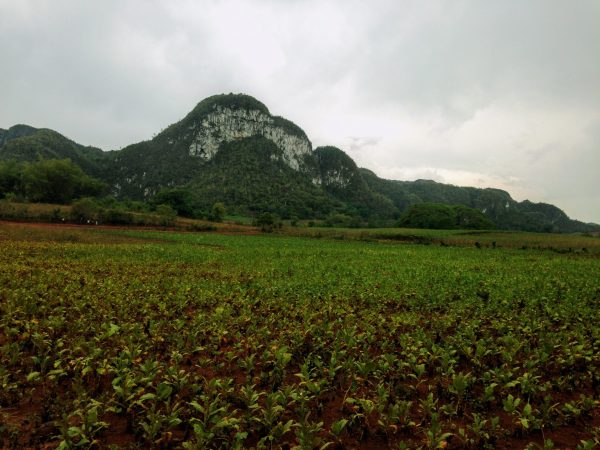 The national park at Viñales is organically farmed and is absolutely lovely to explore on horseback. Admittedly, the day we decided to do this, it was a little cloudy. Maybe even foreboding… But with no internet connection or any way to get a forecast, the best we could do was look up at the sky, gather up all of our optimism, decide it was good enough to go out, and set off.

Fortunately, a farmer took pity on the silly gringos and invited us into his home to drink warm coffee and wait it out. After a Cuba libre, (rum, cola, and lime), this abuelo sang us a traditional campesino rhyming song that was impossible for me to understand. The locals said that when he starts drinking, they can’t understand him either. Keep watching- it gets less blurry.
Being marooned in a monsoon also gave us the opportunity to speak with these guys.

Humberto y Vladimir were professors at the medical school and are now farmers. Both want to travel abroad but have a hard time doing so because Cuba is highly restrictive with passports.

Vladimir (left) applied once for a passport, which costs $180, but was told he was too young and was a flight risk. Applicants never get that money back and for him it amounted to 4 months of lost wages. He says he just wants to visit his father who is an expat in Oregon.

Humberto (center) is fortunate to have a grandparent from Spain, so he is trying to travel through a different route. You can obtain a Cuban Spanish passport if you are the direct descendent of a Spaniard. First, his mother will apply for a passport. Then he will be able to obtain one.

Two best friends, raised in the same small town. Humberto won the genetic lottery and Vladimir did not, and now Vlad is sadly stuck.

They both also want to learn French and routinely search the local libraries and bookstores of the surrounding towns for a French-Spanish dictionary, but have been unable to find one. We have their contact info and are going to do our best to make sure they get some, at least digitally.