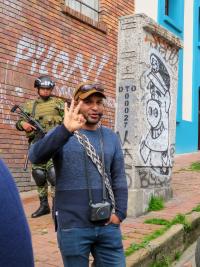 Growing up, we were taught that graffiti is bad. Tagging was destruction of property, writing was low-class, anything spray painted was done by vandals. The Bogota Graffiti Tour turned that worldview upside down.

Our tour guide, Jeff, is an anthropology professor at the National University of Colombia and he gave an amazing, free, 3-hour tour of the local street art. He was personally connected to many artists in the Bogota graffiti community and was able to tell us the background and stories behind many of the works we saw. His definition of Graffiti is: a public work of private expression, legal or illegal, which may be political, personal, or fun in nature. We could not recommend this tour highly enough.

I’d like to start with one of my favorite artists on the tour: Lili Cuca. According to Lili, learning to paint graffiti was one of the best things that she ever did. You see, Bogota is not a particularly safe place for women at night. This is also when most graffiti is painted and because of that, there aren’t many female graffiti artists. When Lili was encouraged to learn to paint, she started bringing her brothers as body guards or only painting in large groups. Eventually, she got more and more comfortable with her ability to take care of herself on the street. She described the experience as empowering. I thought her artwork was, too.

One of the best moments on the tour was when we stopped here to take a look at this pig cop piece and Jeff told us a story about a police-run prostitution ring directly in front of this policeman. It turns out most police officers don’t speak English in Bogota.

One really neat aspect of the graffiti culture is collectives, which is a group of artists who join together to paint particularly large works under a single name. This work was done by the APC (Animal Power Culture or Animal Power Collective), and featured over 30 distinct artists. It was done with permission of the owner of the cat-themed coffee shop.

We weren’t particularly impressed by this mural, but do you recognize the raft? This is a portrayal of the Muisca ceremony mentioned in our article on the gold museum, and depicted in a fabulous gold work from that collection. The tag in the middle of this mural is out of character, painted by a “hooligan”. (Technical term). Most taggers are also graffiti artists and respect the work of their peers. Because of that, the most effective way to make sure a tagger doesn’t write on your property is by allowing a mural artist to paint something there.

We have so many more photos of graffiti from this tour but these were a few of our favorites. Again, we couldn’t recommend the Bogota Graffiti Tour highly enough.