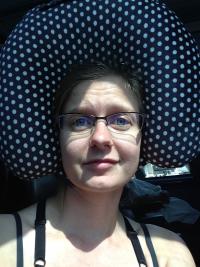 I hadn’t made any plans when I left for Panama, but after less than 24 hours in Panama City I knew I had to escape. A climbing friend had mentioned a place in the mountains called Boquete and I found a bus that would take me there.

As soon as we left the city limits, I started feeling better. That is, until they turned on the entertainment. A Spanish-dubbed old Kung Fu movie blared at max volume, so loudly it hurt my ears and my head and it threatened to hurt my soul. I resorted to wearing my neck pillow as ear muffs and that helped slightly. From that moment on, I never, ever forget ear plugs on a trip. They’re on my standard packing list and I just don’t leave town without them.

Rather unexpectedly, we were stopped for an inspection and searched with a drug dog… and I was the only person who was asked for identification and questioned. I realized then that I hadn’t seen a white person since I left Panama City. I think this was a routine stop, or would have been, if there hadn’t been a weird gringa travelling alone on the bus.